We’re excited to announce the promotions of two veteran officers yesterday afternoon! Detective Sergeant Joseph Gorski was promoted to Deputy Chief of Police while Detective Kristen Lohrstorfer was promoted to Sergeant and is the first woman to achieve a supervisory rank in the North Aurora Police Department.
Mayor Mark Gaffino administered their oaths of office as numerous officers, civilian staff, family, and friends looked on. After completing their oaths, their families had the honor of pining their badges and rank insignias on their uniforms.
Det. Sgt. Joseph Gorski began his nineteen-year law enforcement career with the Village of North Aurora as a patrol officer in 2003 and received several citizen and department commendations during this time. He was also a Field Training Officer and later served as a Detective for six years before being promoted to Patrol Sergeant in 2013. In 2017, he was assigned as Detective Sergeant in which he led a staff of three detectives and oversaw several high profile cases.
In addition, Joe was a founding member of the North Aurora Honor Guard unit and a founding member and Assistant Commander of the Kane County Chiefs of Police Honor Guard. He has served as an investigator on the Kane County Major Crimes Team and the Kane County Major Crimes Officer Involved Death Team, most recently as the Southern Team Supervisor.
Joe’s career path followed his father Joe, who is a retired Police Lieutenant with the Westchester Police Department, and his grandfather Joe, who was a Lieutenant with the Oak Park Fire Department. He is proud to carry on his family’s tradition of public service.
Det. Kristen Lohrstorfer began her seventeen-year career in 2005 as a patrol officer. Throughout her years at the North Aurora Police Department she became a Juvenile officer, Field Training Officer, Evidence Technician, certified Crisis Intervention Team (CIT) officer, a Detective, and a School Resource Officer assigned to Jewel Middle School. Detective Lohrstorfer joined the Kane County Major Crimes Task Force as an Investigator as well as the Kane County SWAT team as a trained Negotiator.
Kristen has spent much of her time trying to enhance the juvenile program here in the police department and Kane County. She is part of the Kane County Juvenile Justice Council and is the second Vice President for the Illinois Juvenile Officers’ Association and the President of the Kane County Juvenile Officers’ Association since 2017. Sergeant Lohrstorfer will be assigned to the Patrol Division on the night shift.
Please join us in congratulating Deputy Chief Gorski and Sergeant Lohrstorfer on their promotions! We anticipate great things from both of them! 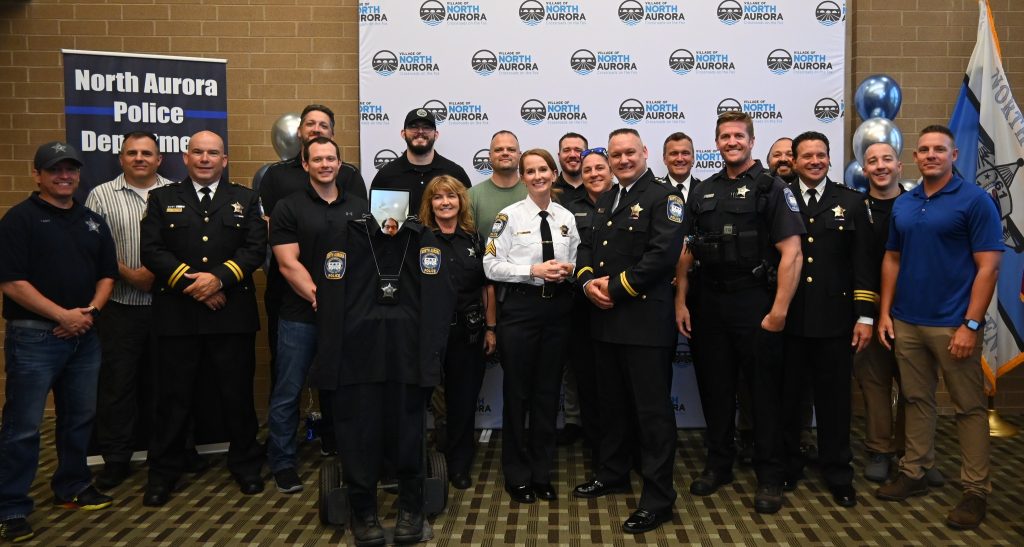